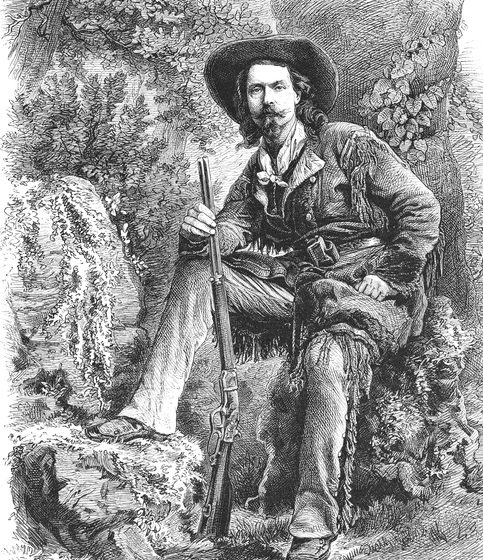 Cavalry scout, Pony Express rider, ranch hand, wagon train driver, city planner, railroad contractor, bison hunter, fur trapper, gold prospector, and inventor of Show Business, William Cody’s legend rides on as a symbol of the unbridled possibilities of the early American West. Cody’s horsemanship and sharpshooting skills gained notice by the U.S. Army, which employed him as a Cavalry scout during the Indian Wars—once eluding capture over a 350-mile distance by horse and by foot to deliver messages to U.S. military forts. Cody received the Medal of Honor for his brazen exploits and was dubbed “Buffalo Bill” for his hunting skills in supplying Pacific Railroad workers with bison meat after the Civil War.

Cody’s fantastical experiences on the American frontier became the inspiration for his wildly popular Buffalo Bill’s Wild West show with the likes of Calamity Jane, Annie Oakley, Wild Bill Hickok, and Native Americans, including Lakota chief, Sitting Bull. Cody invented the concept of the “business of show” with his circus-like extravaganza of sharpshooters, trick riders, and cowboys-and-Indians reenactments. Debuting in 1863, Buffalo Bill’s Wild West and Congress of Rough Riders of the World thrilledaudiences across the U.S. and Europe, making Buffalo Bill an all-American celebrity and the toast of royalty abroad.

As the penultimate showman, Cody purposefully employed indigenous people for their cultural survival and financial gain, referring to the American Indian as “the former foe, present friend, the American,” believing that “every Indian outbreak that I have ever known has resulted from broken promises and broken treaties by the government.” Cody encouraged the “Indians” to demonstrate their authentic cultures in his shows to contrast the stereotypical savage portrayal held by the government. Despite his bawdy roughrider persona, Cody was a feminist in a man’s world. “What we want to do is give women, even more, liberty than they have. Let them do any kind of work they see fit, and if they do it as well as men, give them the same pay.” Buffalo Bill ultimately became a conservationist, speaking out against hide hunting and introducing the responsible stewardship of hunting season. A true turn-of-the-century renaissance man!

Discover Buffalo Bill’s frontier and a few for yourself on a Cosmos North America vacation like Exploring America’s National Parks.